Glomus tumor (GT) is a benign neoplasm of well-differentiated mesenchymal cells. GTs is commonly found in the subcutaneous tissues of the distal extremities, which are rich in glomus bodies (1), but can also occur anywhere in the body. Esophageal GT is an extremely rare tumor, to date, there are less than ten literatures regarding esophageal GTs that have been published. The preoperative diagnosis of esophageal GT with other types of esophageal submucosal tumor (SMT) is difficult to be made, thus requires a multi-team medical approach. The purpose of this paper is to present a rare case of an asymptomatic patient with esophageal GT. We also discuss the preoperative investigation, the differential diagnosis and the treatment of the patient.

An asymptomatic 30-year-old man revealed an esophageal mass through a gastroscopy examination. His physical examination and medical history were unremarkable. There was no fever, cough, regurgitation, dysphagia or weight loss. Laboratory data and electrocardiogram (ECG) test were unremarkable except for a slight increase in CEA level 5.12 ng/mL (normal value 0–5 ng/mL). Blood stool was negative for occult blood. A Non-enhanced chest CT scan showed well-defined mass with homogeneous densities with clear margins protruded into the lumen. Contrast-enhanced CT showed progressive homogeneous enhancement of the mass. On 2D reconstruction, the mass size measured was around 1.1 cm × 1.5 cm × 1.9 cm located at the middle part of the esophagus. No enlargement of the lymph nodes was observed (Figure 1). Gastroscopy result showed a 2.0 cm × 1.8 cm esophageal well circumscribed submucosal mass located 28–31 cm away from the incisors, with normal overlying mucosa (Figure 2). Endoscopic ultrasound (EUS) was performed using a UM-3R (Olympus Optical Co., Ltd., Tokyo, Japan) with a 20-MHz transducer. EUS showed a 1.2 cm × 0.8 cm heterogeneous, hypoechoic mass originated from the submucosal layer, that was adjacent to the thoracic aorta and sharply demarcated. Radial echoendoscope imaging was obtained with Aloka, SSD-α-5 revealing vascular rich signals within the mass (Figure 2).

Figure 2 Endoscopic view of an esophageal glomus tumor. (A) An esophageal submucosal mass located 28–31 cm away from the incisors, with a normal overlying mucosa seen under gastroscopy; (B) radial endoscope imaging showed heterogeneous hypoechoic mass originated from the submucosa layer (green dotted line); (C) vascular rich signals within the mass located adjacent to the thoracic aorta.

Since the tumor located close to the thoracic aorta, we have referred the patient to the cardiothoracic surgeon consultation before the surgery. The patient and family decided to undergo endoscopic treatment. The patient was conditionally fit, and was told the risks and benefits of the submucosal tunneling endoscopic resection (STER) procedure (Figure 3) and provided their written informed consent. The procedure achieved an en-bloc (R0) resection with no complications was observed. The postoperative pathological exam at low magnification revealed a round, and flaky tumor cells distributed around the blood vessels. At high magnification, the neoplastic cells are uniform and round, with granular eosinophilic cytoplasm. The cell boundary is sharply defined with the nuclei located in the center of the cell. Additionally, this tumor contained hyalinized stroma (Figure 4). The final diagnosis was confirmed by immunohistochemistry of positive smooth muscle actin (SMA), vimentin, caldesmon and focal positive of desmin, synaptophysin (Figure 5). Ki67 index was 12%. The specimen showed negative staining for chromogranin, CD56, pan-CK, CK5/6, P63, DOG1, S-100, calponin, and CD117. After 1 year of follow-up, the patient remains healthy without any recurrence of the disease. 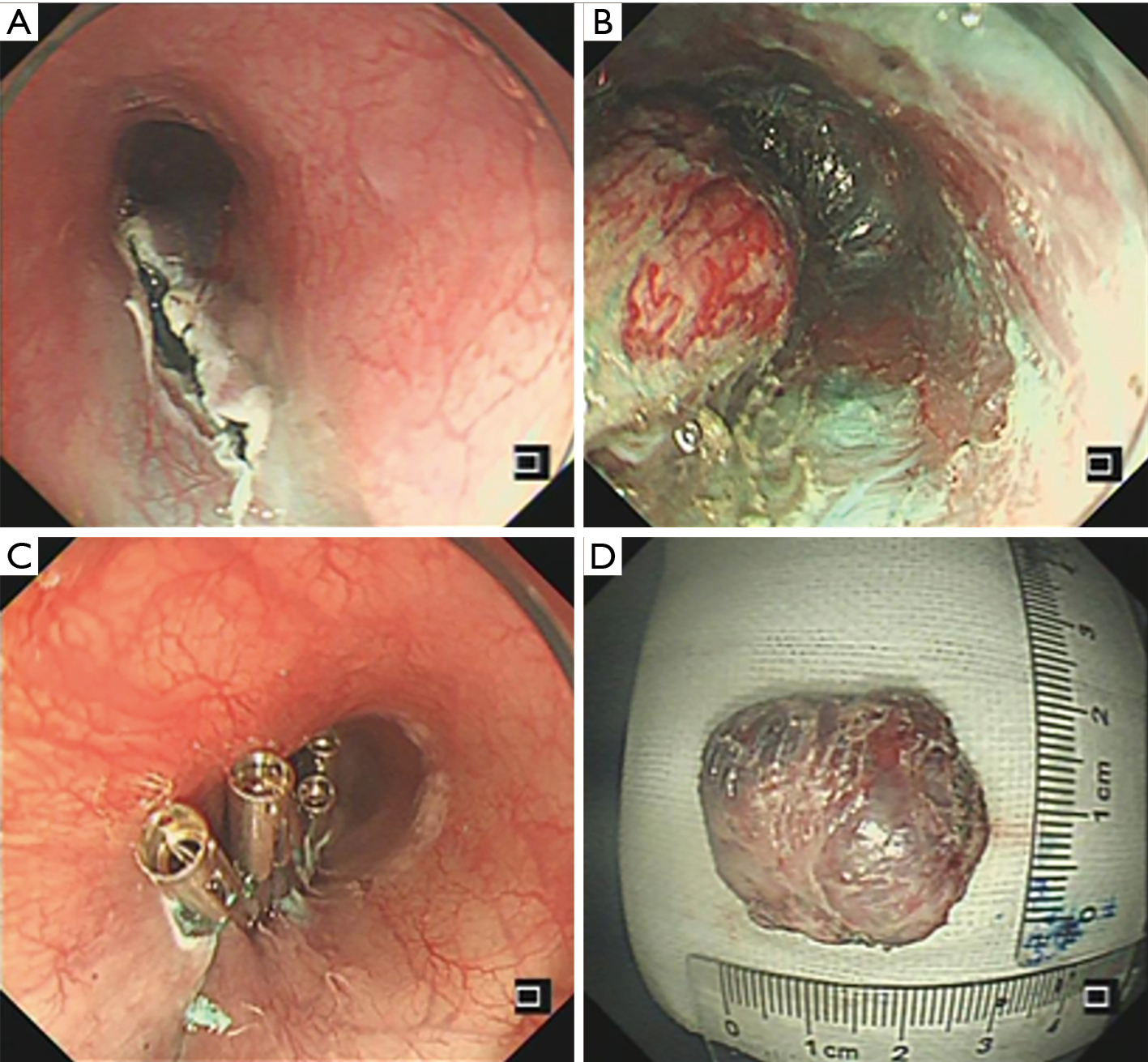 Figure 3 Submucosal tunneling endoscopic resection. (A) Incision 5 cm above the tumor to create a submucosal tunnel; (B) mass under the submucosal layer; (C) closing the entry mucosa orifice with hemostatic clips; (D) the resected specimen. 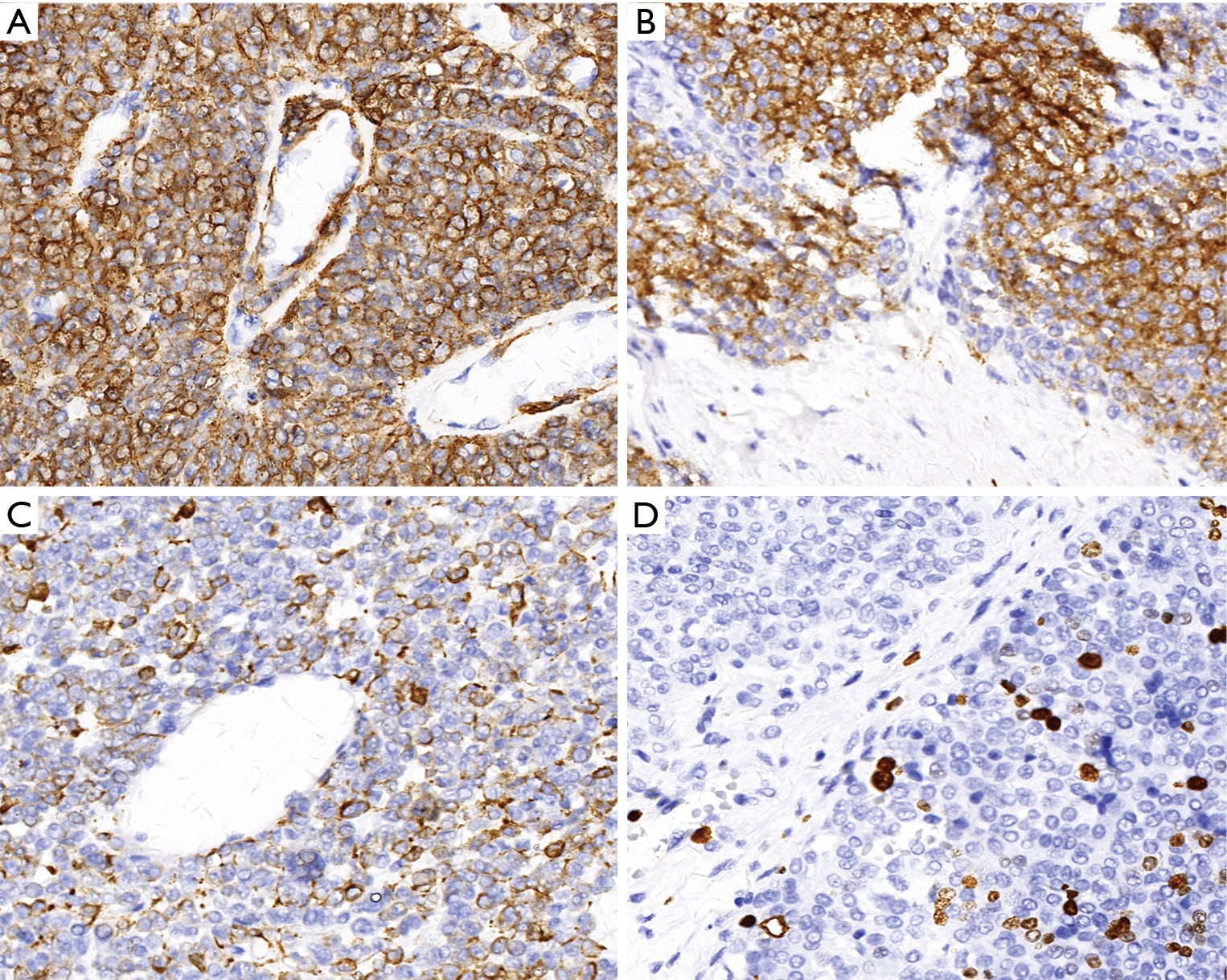 GT is commonly found in the subcutaneous tissues of the subungual region and rarely found in the gastrointestinal (GI) tract (2). It is a rare benign soft tissue tumor and esophageal GTs are accounting for approximately 1% of all soft tissue tumors. The vast majority of GT found in GI tract located in the stomach, and to our knowledge, there are only a few literatures regarding esophageal GT (3-6). GTs can also be found in the bone and joints, skeletal muscle, soft tissue, mediastinum, trachea, kidney, uterus, and vagina (7). Although most of GTs are known to be a benign tumor, they can show a malignant feature as well. That includes: (I) tumor size larger than 2 cm, vascular involvement, and infiltrative growth; (II) atypical mitotic figures; (III) obvious nuclear atypia and any number of mitotic activity (8). Folpe et al. determined that high nuclear atypia alone, high cellularity, necrosis, and vascular invasion were not associated with metastasis (8). Miettinen et al. (7) stated that determination of malignancy criteria for GT remains controversial; it indicates spindle cell changes and vascular involvement have become the potential criteria.

An esophageal SMT diagnosis can be varied which include lipoma, esophageal cyst, leiomyomas, gastrointestinal stromal tumor (GIST), schwannomas, hemangioma, neuroendocrine tumor (NET), GT and many more. Ugras et al. (9) presented a large esophageal GT with oncocytic features mimicking GIST. In our case, the preoperative diagnoses were still doubtful, preoperative diagnosis mainly depends on CT and EUS. GTs are unlike other mesenchymal tumors, GTs have characteristic features of prominent vascular channels, which can be identified by contrast-enhanced CT. According to the CT and EUS examination, the diagnosis of lipoma, an esophageal cyst can be ruled out. Since under EUS, lipoma will show a hyperechoic whereas esophageal cyst will show echoless. On the other hand, leiomyomas, GIST, and schwannomas were also less likely. These tumors are generally originating from the muscularis mucosa or muscularis propria layer, hypoechoic and hard texture in leiomyomas. The patient lesion originated from the submucosa, smooth texture and rich in vascular signals, thus the diagnosis of these tumors was less likely. GIST on contrast-enhanced CT will show a relatively lower density than that of GT (10). Furthermore, hemangioma (including lymphangioma), GT and NET diagnosis should be considered due to its layer of origin from submucosa. In our case, hemangioma and GT were considered first, as the radial echoendoscope imaging revealed abundant blood flow inside the mass. Eventually, the confirmed diagnosis depends on the histopathology and immunohistochemistry.

Treatment of choice for esophageal SMT includes surgery (laparoscopic or open surgery) and endoscopic treatment (endoscopic submucosal excavation, endoscopic submucosal dissection, or STER). In recent years, the rapid development of endoscopic technology has brought us more diagnostic and therapeutic methods. STER and other endoscopic minimally invasive techniques definitely have some advantages when compare to the surgery. Since surgical resection causes larger wounds, longer time for recovery, higher costs and poorer quality of life. STER also acquires numerous advantages compared to other resection procedures, including perseverance of mucosal integrity, shorter hospital stay, decrease rick of perforation and infection (11-13). The goal standard of the surgery is to achieve a negative margin (R0) of the resected tumor.

Finally, esophageal GT treatment should be carefully planned as it has a potential malignant behavior. The choice of STER was preferred by the team after a discussion with multidisciplinary team and according to the patient’s best interest. The procedure was performed by an endoscopist expertise (R Shi), who has already experienced more than 300 cases of STER for SMT lesions in esophagus and stomach. In our case, we achieved an en-bloc resection with negative margin and no massive bleeding observed perioperative. During hospitalization, the patient showed no discomfort. 1 year of follow-up, the patient remains healthy without any recurrence of the disease.

Preoperative diagnosis of esophageal GT is a difficult diagnosis due to its rarity and non-specific clinical symptoms. Immunohistochemistry is the gold standard for the diagnosis and differential diagnosis. Since the tumor is rare, there is no proper guideline in staging, treating and follow-up. The best treatment of choice is still depending on the surgeon experience and knowledge. In this case, STER was performed and postoperative pathology confirmed negative margins. Although most GI GT are clinically benign, there has been a case reported a patient with a large GT developed liver metastasis and died. Therefore, more studies about the esophageal GT and relatively long-term follow-up should be carried out.

Informed Consent: Written informed consent was obtained from the patient for publication of this manuscript and any accompanying images.