Most patients with adenocarcinoma of the pancreas present with metastatic disease or locally advanced unresectable pancreatic cancer (LAPC) that are defined as surgically unresectable at the time of diagnosis. With only about 1% of patients is still alive 5 years from the time of diagnosis, these patients have a very poor prognosis. Current therapeutic approaches for patients with LAPC include these of chemoradiotherapy (CRT) or chemotherapy (1,2). Tumor-associated antigens, including carcinoembyronic antigen (CEA), pancreatic anti-oncofetal antigen, tissue polypeptide, cancer antigen (CA) 125, and carbohydrate antigen (CA) 19-9 have been linked to pancreatic adenocarcinoma. CA 19-9 is a sialylated Lewis a blood group antigen most commonly expressed in pancreatic cancer as well as benign hepatobiliary disease.

Our study aimed to investigate whether CA 19-9 provides prognostic information in patients with LAPC treated with CRT and to determine whether such endpoints should be reported in future randomized trials. This could help to identify patients who may likely benefit from various therapeutic strategies.

From December 1998 to October 2009, 253 consecutive patients with pancreatic adenocarcinoma treated at Roswell Park Cancer Institute (RPCI) were identified. All patient data were entered retrospectively by a single investigator after approval from the hospital institutional review board. Of the 253 patients, 159 underwent treatment with CRT or chemotherapy alone. Patients with metastatic disease at presentation and those who underwent surgery for definitive resection were excluded. Patients with islet-cell tumors and mucinous cystadenocarcinoma were also excluded from the analysis.

To avoid false-positive elevation of serum CA19-9 due to hepatobiliary diseases, chronic pancreatitis, obstruction of the common bile duct, all CA l9-9 levels were matched to a concomitant bilirubin to ensure biliary obstruction was not affecting the interpretation of CA 19-9 concentration. Patients with a serum bilirubin more than 2 mg/dL at the time of CA 19-9 measurement were excluded. The median pre-CRT CA 19-9 and post-CRT values were obtained. This was tested in 50 point increments beginning at <50 to ≥1,000. Percent change in pre to post-CRT CA 19-9 levels were calculated as follows: [(pre-CRT CA 19-9)-(Post-CRT CA 19-9)]/(pre-CRT CA 19-9) and were tested using cut points of 10% increments were from <0% (increased) to ≥90%.

Survival was measured from the date of first post CRT CA 19-9 level until death or last follow-up to ensure meaningful interpretation for the variable when evaluating a decrease in value. Progression free survival was calculated from date of first post CRT CA 19-9 level until recurrence as evidenced by radiographic imaging. Initial (univariate) log-rank tests were performed to determine the predictive value of categorized versions of the first post-CRT CA 19-9. Univariate and multivariate statistical methodologies were used to determine significant prognostic factors for overall survival.

The Kaplan-Meier method was used to obtain overall survival and recurrence free survival estimates while survival was compared between groups using the log-rank test. P values for multiple comparison were adjusted using the method developed by Lausen and Schumacher (13). Values for continuous variables are given as median (range). Values for categorical data are specified as frequency (percent). Statistical Analysis was performed using SAS Statistical analysis software version 9.2 (SAS Institute Inc, Cary, NC, USA). A nominal significance level of 0.05 was used.

Of 116 patients, 84 underwent CRT and 32 received chemotherapy alone. Of the 84 patients that underwent CRT, 54 patients had available pre and post CRT CA 19-9 levels and a bilirubin of less than 2 mg/dL at the time the CA 19-9 was measured. The characteristics of the patients are shown in Table 1. 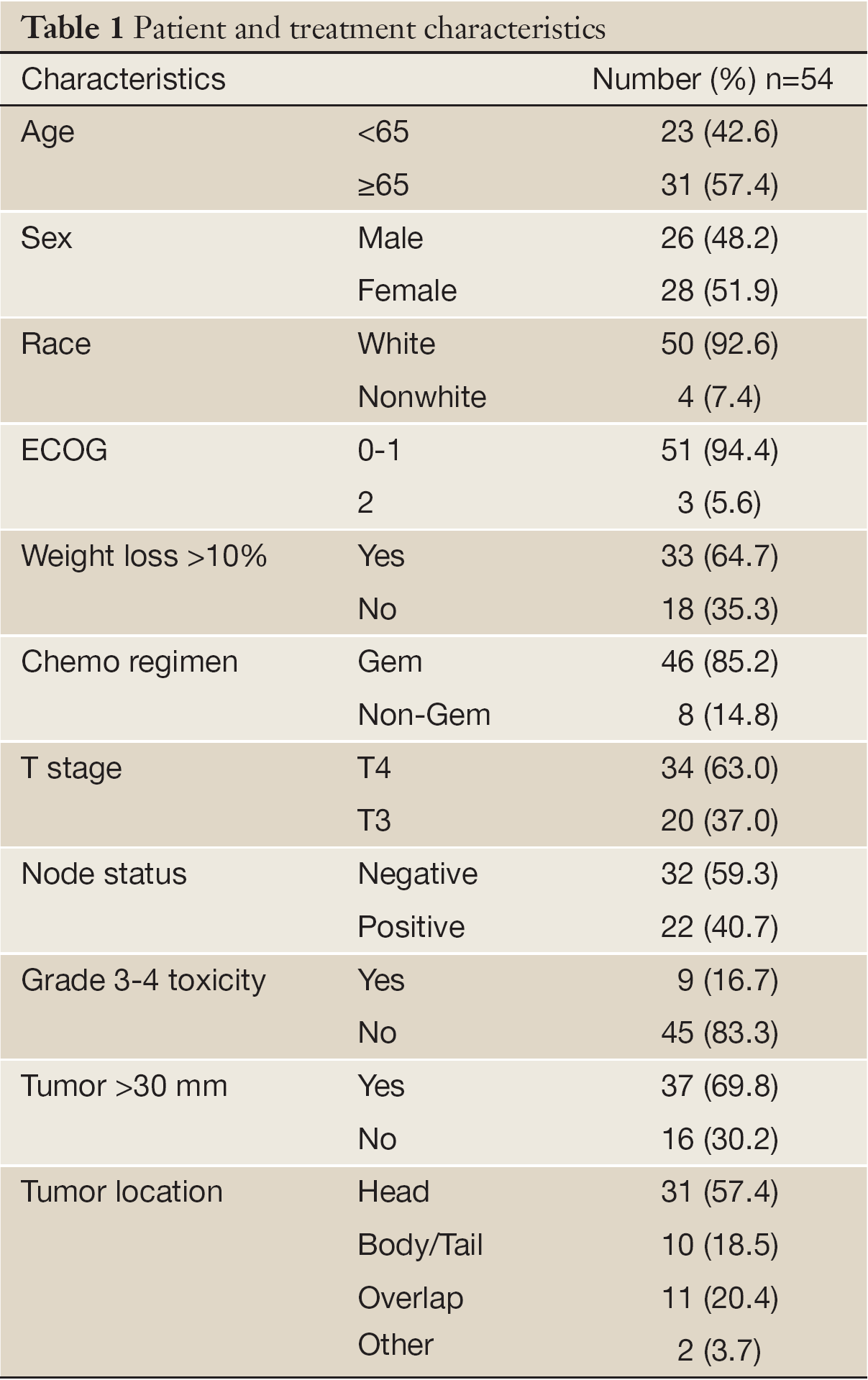 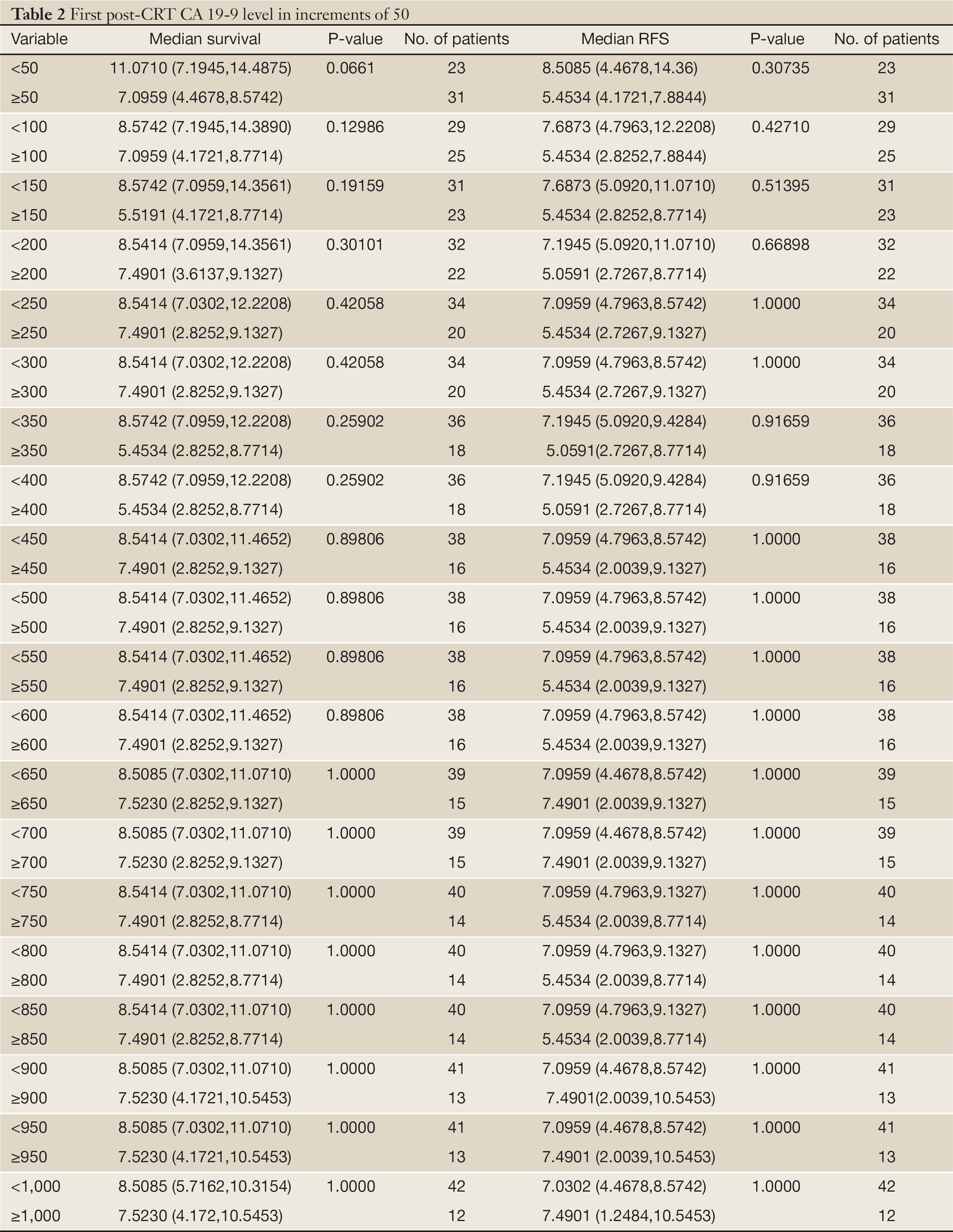 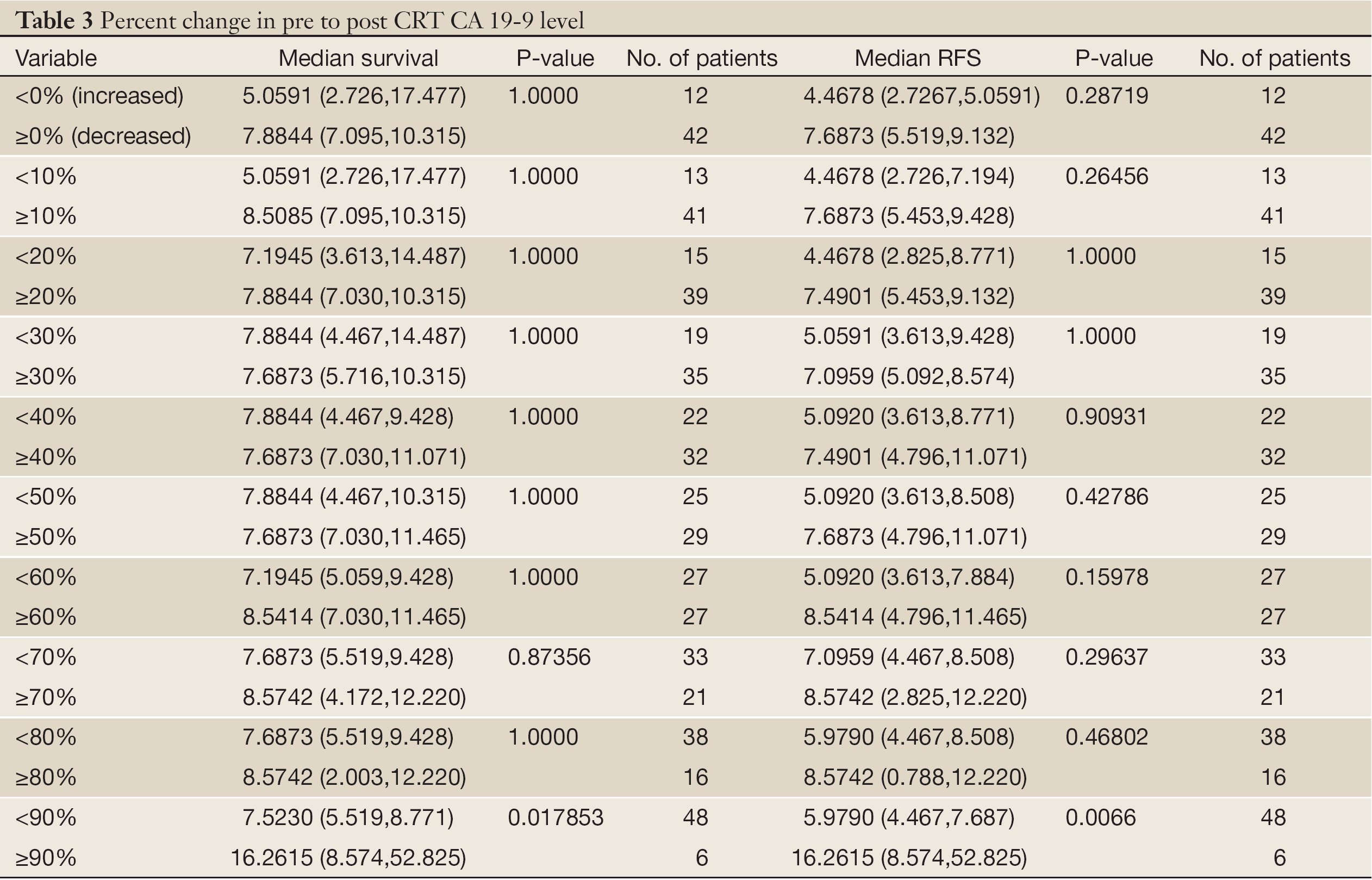 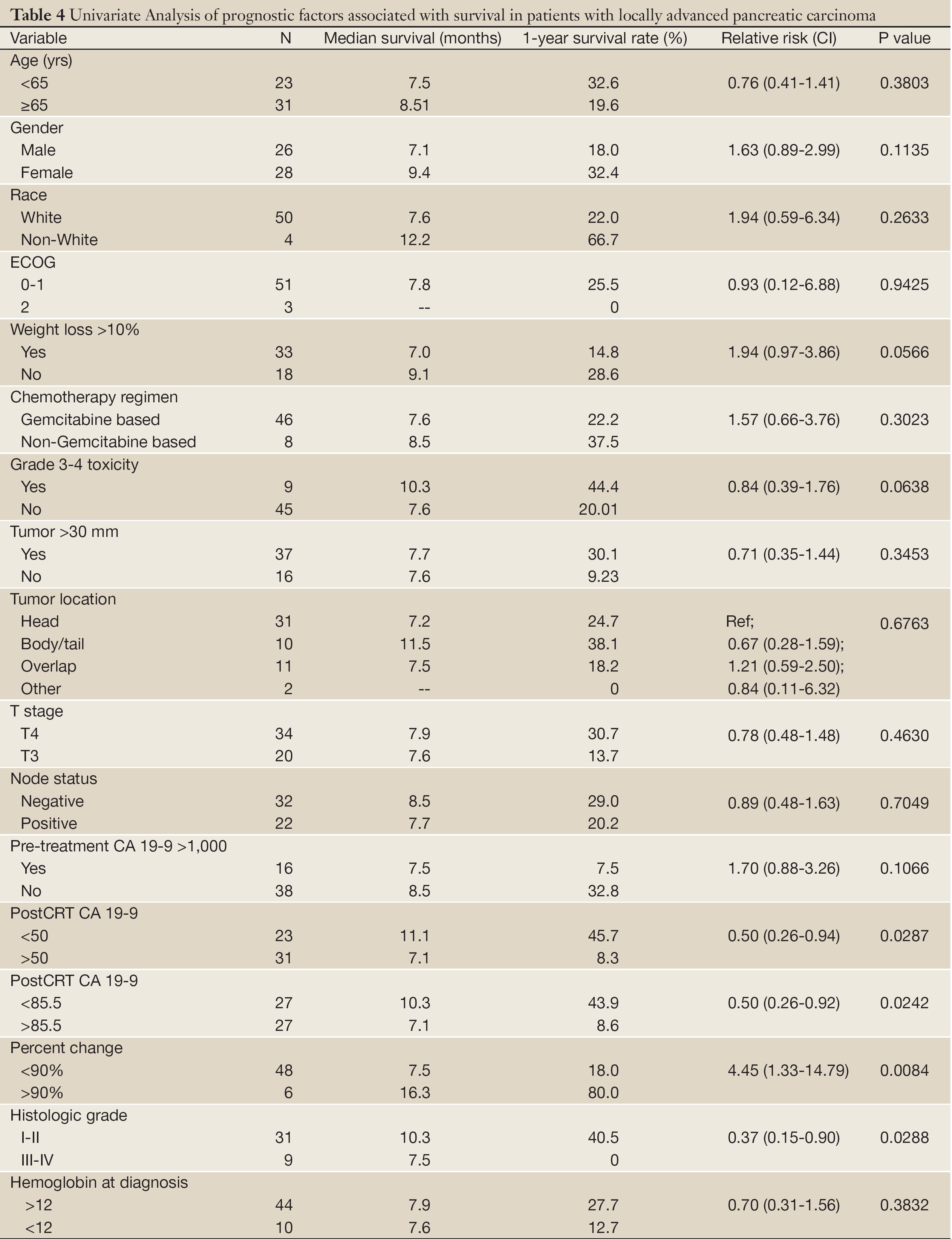 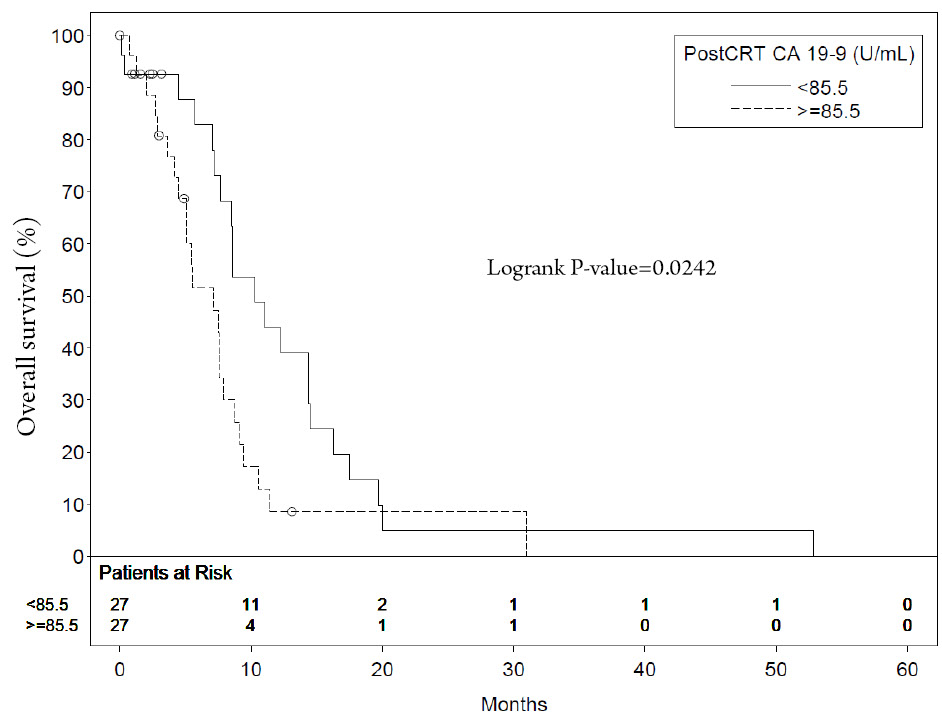 Figure 1 Median survival of patients with postCRT CA 19-9 level <85.5 U/mL compared with those with higher levels 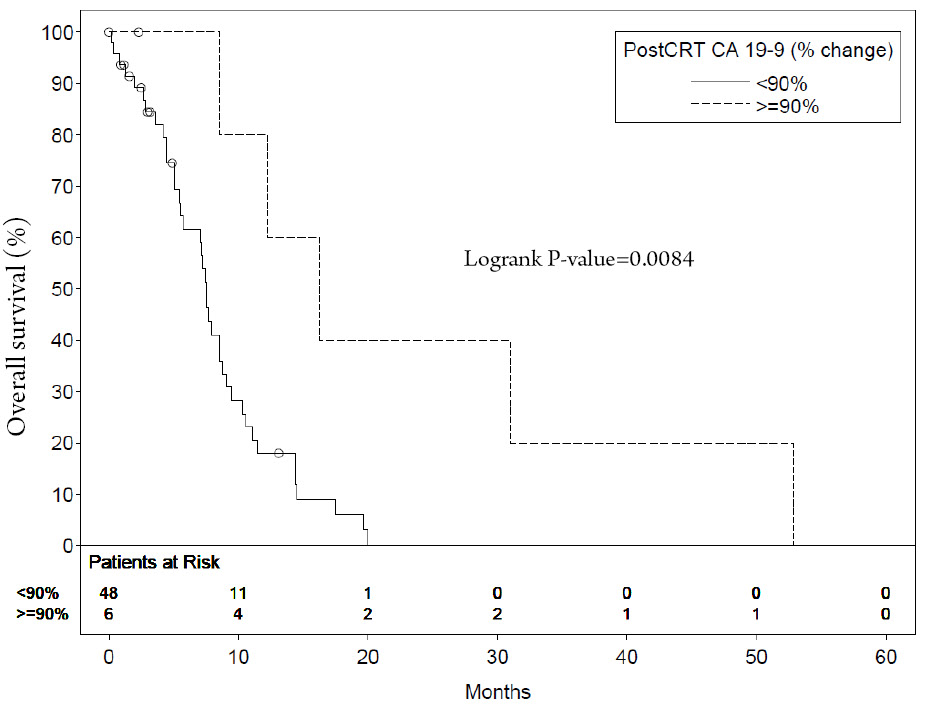 The majority of patients with pancreatic cancer present with unresectable disease and appropriate selection of patients for CRT continues to be a challenge and the treatment of LAPC continues to evolve. Analysis of prognostic factors may be useful in determining which patients would benefit from intensification of therapy and designing future clinical trials.

CA 19-9 is the most common and important tumor marker used in for patients with pancreatic cancer. There have been many studies evaluating CA 19-9 as prognostic for resectable pancreatic cancer. RTOG 9704 demonstrated a prognostic role for postoperative CA 19-9 in patients with resectable pancreatic carcinoma following surgery. With a post-resection CA 19-9 higher than 90 U/mL, patients had a highly significant increased risk of death (HR, 3.34; P<0.0001) compared with those with a value less than or equal to that cutoff. This was the most important predictor of death in this cohort of patients. The results of this analysis of postoperative CA 19-9 level are important because they clearly identify a subgroup of patients who have a much higher risk of death after surgery with curative intent.

In patients receiving systemic chemotherapy for metastatic disease as well as LAPC, CA 19-9 levels have also been shown to be of prognostic significance in terms of overall survival. Tsavaris et al. demonstrated through multivariate analysis CA 19-9 levels of >30 times the normal limit had a significant independent effect on survival (5). Serum CA 19-9 alterations have been defined in a number of ways. In a study by Takahashi et al., they developed a new classification utilizing pretreatment CA 19-9 and proportional alteration of CA 19-9 2 months after the initiation of treatment (14) Their categories were defined as: I (increased), MD (modestly decreased), and SD (substantially decreased). In a study by Halm et al., a decrease of CA 19-9 during chemotherapy with gemcitabine predicted overall survival time in patients with advanced pancreatic cancer (8). In their study, they found that a decrease in CA 19-9 of >20% had the greatest prognostic impact.

These results are very similar to our findings in the present study. On univariate analysis, we found that post CRT CA 19-9 <50 U/mL, post CRT CA 19-9 <85.5 U/mL, percent change ≥90%, and histologic grade all showed prognostic significance predictor of survival. The median survival of patients with a CA 19-9 less than the post-treatment median was 10.3 months compared with those with a CA 19-9 level greater than the median value of 85.5 U/mL (P=0.0242). Our results were confirmed on multivariate analysis showing that a post treatment CA 19-9 level less than the median value of 85.5 U/mL was an independent prognostic factor for overall survival.

A strength of our study was that the first post-CRT CA 19-9 levels was tested in 50 point increments and percent change in pre and post treatment CA 19-9 was tested in 10% increments. This allowed us to detect subtle incremental changes that would otherwise not have been detected if a different method was used. In addition, all patients with a serum bilirubin more than 2 mg/dL at the time of CA 19-9 measurement were excluded to account for altered biliary excretion, for which bilirubin is a reasonable marker. This has been documented to occur at levels 1.5× the upper limit of normal or at a level of approximately 2.0 mg/dL (15).

The retrospective nature and sample size are limitations of our study. Patients with CA 19-9 levels within normal limits were not tested for the Lewis antigen. Lewisa-b- and are unable to increase their serum CA 19-9 levels and were not excluded from our analysis (16). However, only approximately 5% of the population are Lewisa-b- so this was unlikely to have a significant effect on our patient population In this study, we analyzed CA 19-9 as a prognostic factor and determined its utility in developing treatment strategies and designing future clinical trials. We analyzed whether peri-chemoradiation CA 19-9 values in the setting of normal bilirubin could predict post treatment survival. Additionally, the optimal time to evaluate CA 19-9 has not been fully investigated in patients receiving definitive CRT, chemotherapy alone, as well as postoperative setting. In our study, median time from the end of concurrent CRT to post CRT CA 19-9 was 36 days (range, 0.00-168.81 days). In RTOG 9704, the median time from surgery to the blood draw for postoperative CA 19-9 determination was 45 days (range, 11 to 57 days) as a secondary end point of its phase III study (4). To correct for the variability in the time between CRT and evaluation of the first post CRT CA19-9 value, we chose to measure survival as a time-varying covariate from the time of post CRT CA19-9 measurement rather than from CRT. Further study is warranted to determine the best time for CA 19-9 measurement to predict survival.

Patients who develop early metastasis are unlikely to benefit from radiation, and identifying this population prior to radiation would be ideal. An attractive strategy to facilitate patient selection for CRT is through a trial of systemic therapy. The time interval between the onset of chemotherapy and CRT provides an observation period of approximately 2 to 3 months. Restaging at the end of this period may identify the emergence of overt metastatic disease. In a study by The Groupe Cooperateur Multidisciplinaire en Oncologie (GERCOR) LAP07, 181 patients were reviewed who were treated with 5-fluorouracil (5-FU) or gemcitabine based chemotherapy for four months. Those without evidence of disease progression were given additional chemotherapy or chemoradiation. Overall survival was improved in patients who went on to receive chemoradiation (17). An accurate surrogate marker for disease progression such as CA 19-9 could further identifying those patients that would most benefit from intensification of therapy. Substantially rising CA 19-9 levels during the induction period may be a harbinger of occult metastatic disease which would allow more careful selection of patients who would most likely benefit from local therapy. The half-life of serum CA 19-9 levels are approximately 1 day but can vary from less than 1 day to 3 days. The median lead time for CA 19-9 elevation before detection of a clinical relapse was 23 weeks (range, 2-48 weeks) (10). Thus, there is a need to optimize the timing of serum measurement that must be validated in a prospective clinical trial.

We demonstrated the prognostic impact of the post CRT CA 19-9 levels. Patients with a post CRT CA 19-9 level greater than 85.5 U/mL had significantly worse overall survival in multivariate analysis. These patients may not benefit from intensification of therapy and could be considered for alternative management scheme as those with lower levels of CA 19-9 would benefit from a more aggressive therapeutic approach.

We suggest that CA 19-9 levels be obtained pre and post chemoradiotherapy. Our results indicate that post CRT CA 19-9 levels may have predictive value for prognosis of patients with locally advanced unresectable pancreatic cancer receiving concurrent CRT. These findings should be validated in future randomized trials and considered for prognostic nomograms.