Recurrent pancreatic cancer after definitive treatment with multimodality therapy universally portends a dismal prognosis, with 5-year survival rates of 5.6% or less (1,2). Unfortunately, this scenario is not uncommon. Among the minority of patients (10-15%) able to undergo potentially curative surgical resection, more than 80% subsequently recur (3,4).

The pattern of recurrence in pancreatic cancer is well-known (4-10). Following resection, approximately 70% develop distant metastases within 2 years, often accompanied by synchronous local recurrence (11,12), while up to 30% exhibit isolated local recurrence (10,13). Autopsy studies have demonstrated that 30% of deaths are due to locally progressive disease, while the remainder result from distant metastases (14). Symptomatic manifestations of local recurrence include pain, bowel obstruction, portal hypertension, biliary obstruction, and malnutrition (15). Although survival is determined chiefly by systemic progression, local progression is an important factor contributing to quality of life (16) and has been associated with decreased time to metastasis (16).

Current therapeutic approaches for patients who develop isolated local recurrence following conventionally-fractionated radiotherapy include palliative chemotherapy and best supportive care, with a very select few undergoing surgical re-resection. Each of these options has significant drawbacks, including: invasiveness and morbidity with re-resection (2,17); systemic toxicity and modest local control with palliative chemotherapy (18); and lack of efficacy with supportive care alone. A possible alternative in this salvage scenario is re-irradiation with stereotactic body radiation therapy (SBRT). SBRT is minimally invasive, can be administered over 5 days or fewer, and may offer a high probability of local control (19-23). Herein, we present a retrospective study of re-irradiation using SBRT at two institutions.

With IRB approval, records of all pancreatic cancer patients treated with SBRT at two academic centers from 2008-2012 were retrospectively reviewed to identify patients with isolated local recurrence (if previously resected) or isolated local progression (if locally advanced disease) after previous conventional radiotherapy and who subsequently received salvage SBRT. Patients were required to meet the following inclusion criteria: age ≥18, Eastern Cooperative Oncology Group (ECOG) performance status 0-2, histologically confirmed pancreatic adenocarcinoma, local disease recurrence/progression determined by a radiologist on pancreas-protocol CT scan following conventionally-fractionated radiotherapy (≤300 cGy/fraction), and salvage SBRT. Patients with radiographic evidence of distant metastasis prior to SBRT were excluded. Patients received heterogeneous systemic therapies before and/or following re-irradiation with SBRT, but no other forms of local therapy. No exclusions were made based on systemic therapies received.

For non-Cyberknife™-based treatment (N=11), initial patient position was based on cone-beam CT with alignment to spine. Volumetric kV-imaging was then used to align biliary stent and/or fiducials to the digitally-reconstructed radiograph. All fiducials were placed specifically for SBRT image guidance using an endoscopic approach (N=11 patients); complications of fiducial placement were observed in only one patient who experienced laryngospasm and had to return for repeat endoscopy the following day. Common bile duct stents were placed endoscopically for relief of symptomatic biliary obstruction and not for purposes of SBRT image guidance, but if a stent was present, then fiducial placement was deemed unnecessary (N=4 patients). If a stent or fiducials were not present, patients were aligned to spine only (N=3). In patients who had previously undergone intra-tumoral fiducial placement, orthogonal kV/MV or kV/kV projection imaging was used to verify fiducial location before first treatment beam delivery and, if indicated, a secondary shift was performed. Active monitoring of treatment delivery accuracy was accomplished using kV and MV projection imaging.

For CyberKnife™-based treatment (N=7; fiducials required), initial orthogonal kV/MV or kV/kV projection images were obtained to confirm fiducial location. The Synchrony™ respiratory tracking system (Accuray) was then used to correct for tumor-associated motion using a series of optical diodes placed on the patient’s chest wall and correlated to the internal fiducials by a computer to generate a model continuously updated during treatment to correct for subtle changes in tumor location.

Clinical data were gathered by retrospective chart review using electronic patient records. Date of progression was defined as the date of first follow-up cross-sectional imaging study showing evidence of distant metastases or local progression as determined by an attending radiologist. Survival was measured from the date of the first fraction of SBRT until date of death or censored at the date of last follow-up if no date of death was available. Toxicity was evaluated using the National Cancer Institute Common Terminology Criteria for Adverse Events version 4.0.

Patient demographic, clinicopathologic, and treatment characteristics were summarized using descriptive statistics. Patient characteristics were compared among different patient subgroups using the Mann-Whitney U test for comparison of medians and the Pearson chi-square test for comparison of proportions. Survival data were analyzed using Kaplan-Meier statistics and compared between subgroups using the log-rank test. A two-sided alpha level of ≤0.05 was considered significant in all cases. Statistical analyses were performed with SPSS (IBM, Armonk, NY). 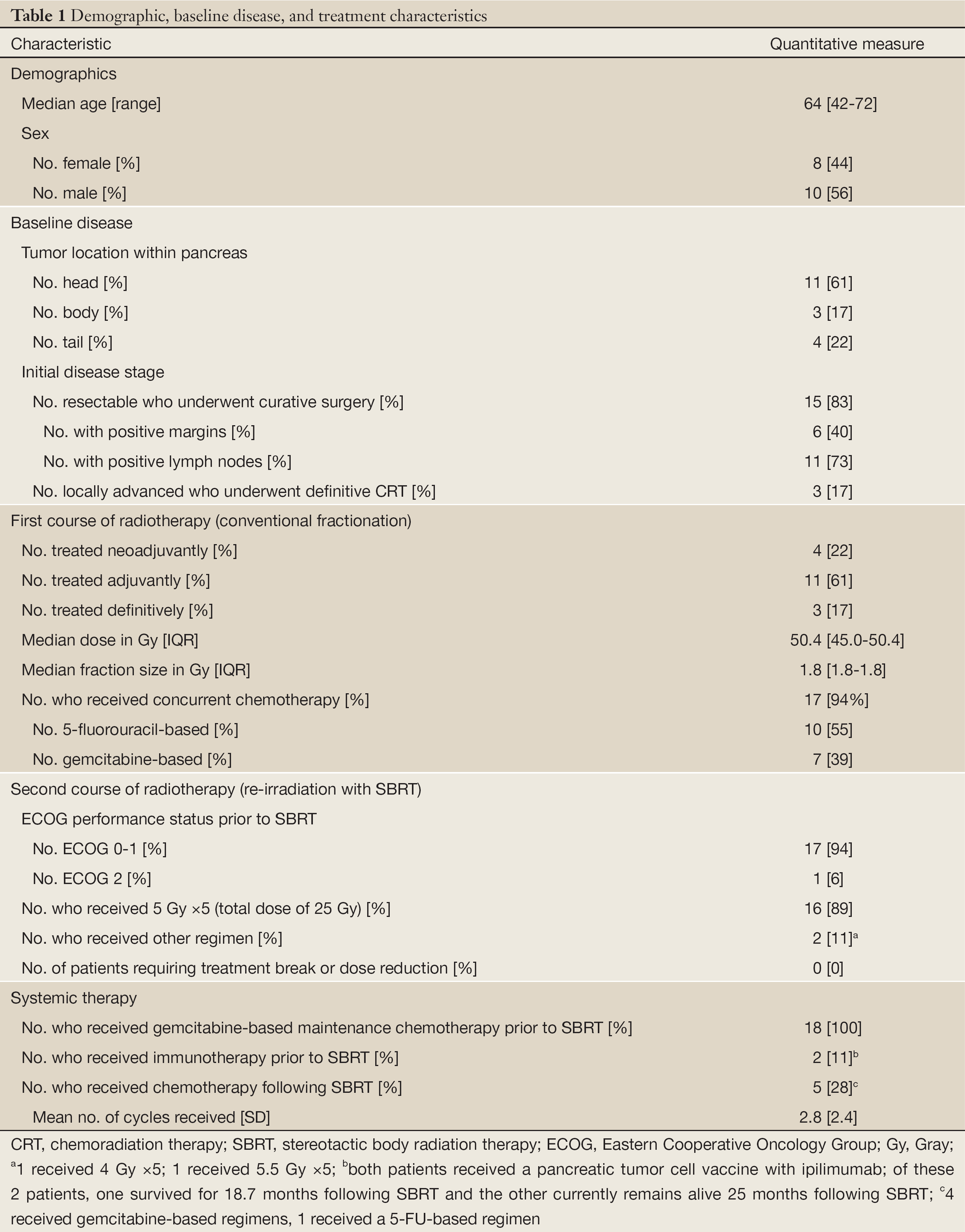 Median follow-up was 34.3 months (range, 6.4-61.6 months) and median interval from local recurrence/progression to SBRT was 2.4 months (IQR, 1.8-5.1 months). Median survival measured from the time of radiographically documented local recurrence/progression was 12.0 months (95% CI, 9.9-14.0 months). Median survival measured from SBRT was 8.8 months (95% CI, 1.2-16.4 months) (Figure 1A). Based on previously published surgical data regarding re-resection for isolated local recurrence (2), patients were dichotomized based on whether local recurrence/progression occurred fewer or greater than 9 months following surgery or definitive CRT. The resulting two groups were similar in regard to age, gender, ECOG performance status, median tumor diameter, and histologic grade as well as rates of margin positivity, lymph node involvement, perineural invasion, and lymphovascular invasion (all P>0.05; Table 2). Patients who recurred/progressed locally within 9 months of surgery or definitive CRT (n=8) survived for a median of only 3.4 months (95% CI, 2.7-4.2 months) after SBRT versus 11.3 months (95% CI, 9.6-12.9 months) for patients who recurred/progressed after more than 9 months (n=10; P=0.019) (Figure 1A). 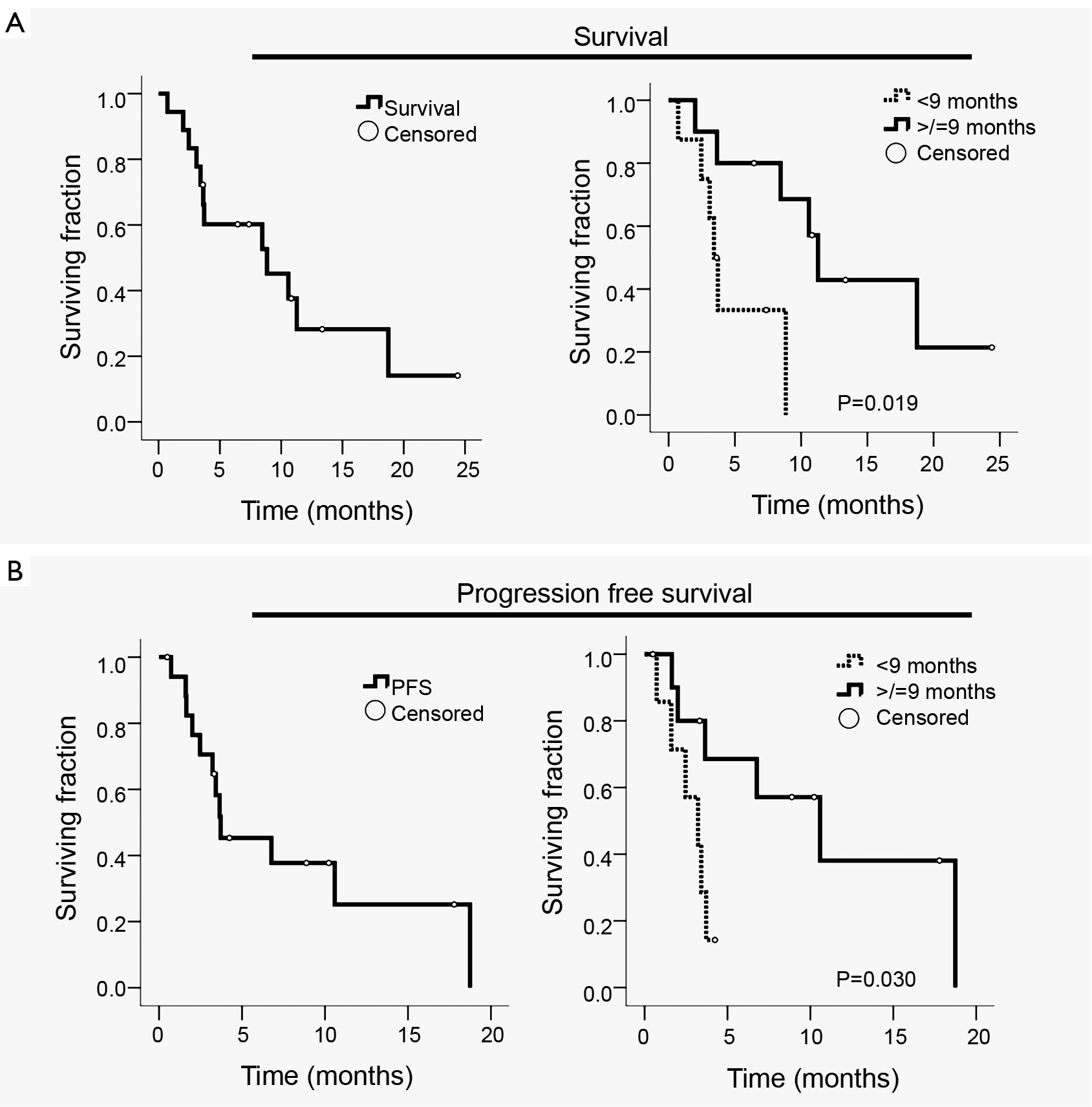 Median progression-free survival (PFS) following SBRT was 3.7 months (95% CI, 0.6-6.9 months) (Figure 1B). Patients who had recurred/progressed more than 9 months following surgery or definitive CRT had a longer median PFS (10.6 months, 95% CI, 3.1-18.0 months) compared with patients who had recurred/progressed within 9 months (3.2 months, 95% CI, 1.3-5.2 months; P=0.030) (Figure 1B). Rates of freedom from local progression at 6 and 12 months were 78% (14 of 18 patients) and 62% (5 of 8 patients), respectively. Of the 12 patients who died during the follow-up period, 8 (67%) remained free from local progression during the interval from SBRT until death. In general, for the patients who did not exhibit local progression, SBRT achieved tumor stabilization, but did not cause a radiographically-evident reduction in tumor size. Seven of the 18 patients (39%) had reported symptoms of abdominal/back pain prior to SBRT; effective symptom palliation was achieved in 4 of these 7 patients (57%) according to follow-up history and physical examination performed within 4-8 weeks of SBRT.

All patients completed SBRT without treatment breaks or dose reductions. Five patients (28%) experienced acute grade 2 toxicity manifesting as fatigue, abdominal pain, anorexia, nausea, and diarrhea. No acute grade ≥3 toxicity was observed. One patient (6%) experienced late toxicity in the form of small bowel obstruction (grade 3). No other late toxicity has been observed at a median follow-up of 8.2 months from SBRT (10.6 months for patients currently alive).

Limited treatment options exist for patients with isolated local recurrence/progression of pancreatic cancer after aggressive multimodality therapy including prior irradiation. Select patients are eligible for re-resection, yet locally recurrent disease is often unresectable as a consequence of vascular involvement, post-radiation fibrosis, or poor performance status. In the largest surgical series examining re-resection with curative intent, resection of disease was achieved in only 16 of 30 patients (53%) who underwent re-laparotomy, and, of these, just 6 (38%) had negative margins, while 3 (19%) were R1 and 7 (44%) were R2 (2). Median survival following re-resection was 11.4 months, while in-hospital morbidity and mortality were 20% and 7%, respectively. Laparotomy additionally interrupted systemic therapy for several weeks. In contrast, SBRT in the setting of locally advanced pancreatic cancer has been shown to have a mild toxicity profile, to achieve high rates of local control, and to require 5 days or fewer for delivery with swift resumption of systemic therapy afterwards (19-21,24) while remaining more cost-effective than conventional radiotherapy or chemotherapy alone (25,26).

Authors of the current study have previously made several prospective reports on SBRT as definitive therapy for locally advanced pancreatic adenocarcinoma (19-21,24). These studies delivered 25 Gy in one fraction [biologically equivalent dose (BED) early/late: 87.5/233.3 Gy], which resulted in acute grade 2 and 3 toxicity ranging from 15-21% and 0-11%, respectively. Extended follow-up from these studies demonstrated late grade ≥3 toxicity to occur at a rate of 9%, typically manifesting as duodenal stricture or perforation (22). These rates were closely reproduced at other institutions, which collectively showed acute and late grade ≥3 toxicity rates of 0-8% and 0-9%, respectively (26-29). Our results (0% acute, 6% late grade ≥3 toxicity) closely correspond to these previously published figures, despite the fact that all patients had undergone conventionally fractionated CRT prior to SBRT. One potential implication of our data, therefore, is that re-irradiation with 5-fraction SBRT (median BED early/late: 37.5/66.7 Gy) may be no more toxic than SBRT administered to radiation-naïve patients, though admittedly the less aggressive dosing regimen employed in the current study renders direct comparison of toxicity rates between studies difficult. One prospective (20) and two retrospective studies (26,30) have examined a similar scenario involving administration of a planned SBRT boost shortly following conventional CRT and offer comparable results with acute and late grade ≥3 toxicity ranging from 0-13% and 0-7%, respectively. It is important to note, however, that the limited median survival of patients with pancreatic cancer may hinder accurate assessment of the true rate of late toxicity following SBRT.

The trials examining SBRT discussed above (19-21) demonstrated excellent local control rates (81-100%), but minimal impact on median survival, which was similar to that observed in our study (8.8 months) at 7.6-11.8 months. This is likely explained by the propensity of pancreatic cancer to microscopically disseminate early (31), rendering local salvage therapy ineffective for prolonging survival due to subsequent emergence of occult distant metastases. Notably, however, two patients in our series who received a pancreatic tumor cell vaccine with ipilimumab prior to local recurrence/progression demonstrated extended survival after SBRT. While we cannot confirm the role of SBRT in prolonging survival in these cases, it is possible that these patients manifested an improved immune response to their tumors following SBRT, similar to the abscopal effect recently reported for patients with melanoma (32,33).

In order to prevent administration of futile local therapy, one strategy is to give chemotherapy for 2-6 months and reassess for metastases before administering re-irradiation with SBRT (30). While this selection approach is preferable, some patients with acute local symptoms may require a more rapid decision regarding local therapy. Our data indicate that SBRT is more effective in prolonging survival for patients who develop isolated local recurrence/progression ≥9 months after surgical resection or definitive CRT. Therefore, in patients for whom a 2-6 month course of chemotherapy is not feasible due to acute symptoms or inability to tolerate further systemic therapy, the decision to give salvage SBRT without induction chemotherapy could be based on the interval between surgery or definitive CRT and local recurrence/progression. Those recurring/progressing after a prolonged time interval (≥9 months) would be more likely to benefit from SBRT, while those recurring/progressing within 9 months would be better served by palliative measures directed at symptom relief (e.g., nerve block, stenting, surgical bypass) with or without salvage chemotherapy.

We thank Joyce Schanne for her incredibly valuable help.