Primary adenosquamous carcinoma (ASC) of the esophagus is a rare entity. Most descriptions of this variant of esophageal cancer consist of case reports or small case series (1-13). While most reports from the western world are single cases, recently small case series have been reported from China and Japan (14-17). To the best of our knowledge, no case series have been reported from the United States. Therefore, little information exists regarding the demographics, clinical characteristics and outcomes associated with this disease. The Surveillance, Epidemiology, and End Results (SEER) Program of the National Cancer Institute collects data from various locations and sources throughout the United States. SEER currently collects cancer incidence and survival data from population based cancer registries that cover approximately 30% of the US population. This translates to available information on a large number of tumors of any single organ. Therefore, the SEER database serves as a useful resource to get a snapshot of the basic features of rare tumors that are unlikely to be treated in any single institution. Given the rarity of adenosquamous cancers of the esophagus and the availability of the SEER database, we sought to study the clinical characteristics of ASC in the United States. We also compared these characteristics to those of the commonly treated adenocarcinoma (ACA) and the increasingly uncommon squamous cell carcinoma (SqCC) of the esophagus.

All patients in the SEER database with a diagnosis of esophageal ACA, SqCC and ASC from 1998–2010 were included with the use of site specific histology codes (8,560/3 and 8,562/3 for adenosquamous; 8,140 for ACA and 8,070 for squamous cell cancer). Demographic data, stage, grade, treatment data and survival data were obtained. Overall survival data was censored at 96 months of follow up.

Clinical characteristics of patients with the three histologies were compared for significant differences. Univariate associations between potential confounders and histology for the three histological types were evaluated by the Wilcoxon rank sum test for continuous covariates and the Pearson Chi-square test for categorical covariates. A P value of ≤0.05 was considered significant. To evaluate the association of selected covariates to survival by histology, unadjusted and adjusted proportional hazards models were generated for the entire study population. The adjusted models controlled for age (used as a continuous variable), gender (female in reference to male), race (black and other race in reference to white), grade (III/IV in reference and unknown in reference to I/II), stage (distant and regional in reference to localized), radiation treatments (yes versus no), histology (ACA and SqCC in reference to ASC), site (lower abdominal, NOS or mid-thoracic to upper cervical), lymph node evaluation (yes or unknown to no examination) and surgical resection (no resection to resection of the tumor).

To further control for the difference in covariates among the histology groups, the inverse propensity to treat weighting (IPTW) approach was implemented. IPTW is preferred to matching, and other methods, in the context of a time to event analysis to estimate the average treatment effect (ATE) (18). Propensity weights were calculated using logistic regression, modeling the odds of ASC verses both ACA and SqCC. Age, race, sex, grade, stage, radiation, site, and node examined were considered as covariates variables. The predicted probabilities were used to calculate weights to create weighted samples. Proc SURVEYPHREG was used to perform a propensity weighted Cox regression model regressing survival on an indicator variable denoting histology. Proc LIFETEST was used to obtain Kaplan-Meier curves of the weighted samples.

In addition, the patients with ASC were analyzed independent of other histological types in order to assess the relationship of different variables to overall survival in this subgroup. Multivariate analysis of this subgroup was not performed given the small number of patients. Also, Kaplan-Meier survival curves were created, comparing the three histologic groups, stratified by grade I/II vs. III/IV. Log rank tests were performed and expressed as P value.

Selection of patients using the inclusion criteria listed above led to a total study population of 29,890 patients with 11,496 (38.5%), 18,110 (60.6%) and 284 (1%) patients with SqCC, ACA and ASC respectively. Table 1 summarizes clinical characteristics of the three histologic subgroups. From a demographic and tumor location point of view, ASC seems closer to ACA than SqCC. However, ASC tumors seem to be more aggressive—they have a much higher grade on average and tend to present at a higher stage whether the SEER historic stage or the AJCC staging is used. Resection rates of ASC are higher than SqCC and about the same as ACA. Both ACA and ASC have a higher resection rate with a lower proportion undergoing radiation when compared to SqCC. 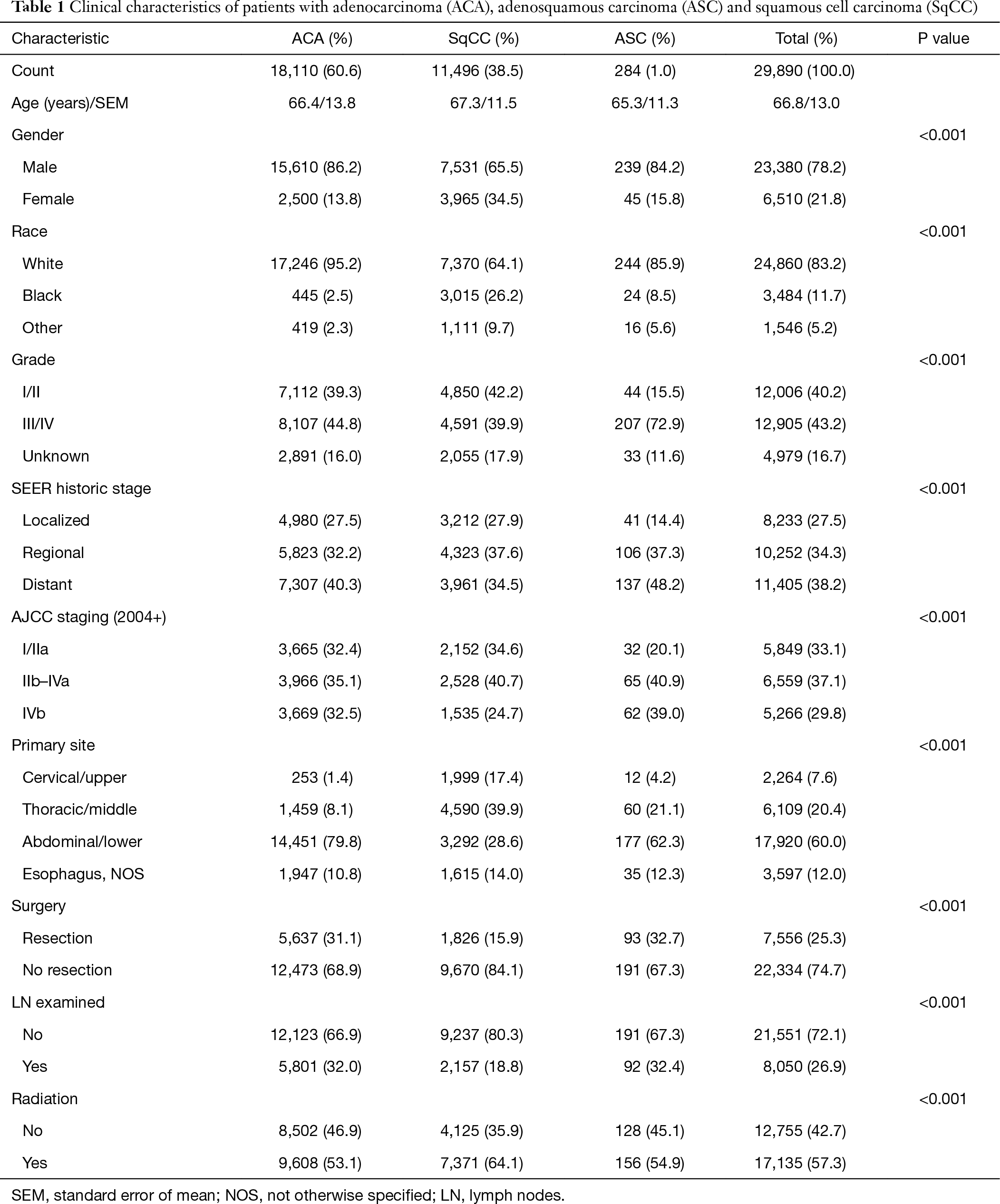 Survival analyses of the combined population demonstrate, as expected, that stage, grade, radiation therapy and resectability are associated with overall survival. Univariate analysis demonstrates that, despite similar stage and resection rates, patients with ASC have poorer survival than ACA and similar survival to SqCC. This association holds true after adjusting for confounding variables on multivariate analysis (Table 2). Additionally, propensity weighted analyses were conducted comparing ASC to ACA and ASC to SqCC. Confirming the results of the multivariate analysis, these analyses showed that the survival of patients with ASC was significantly worse when compared to ACA, but not so when compared to SqCC (Figure 1). 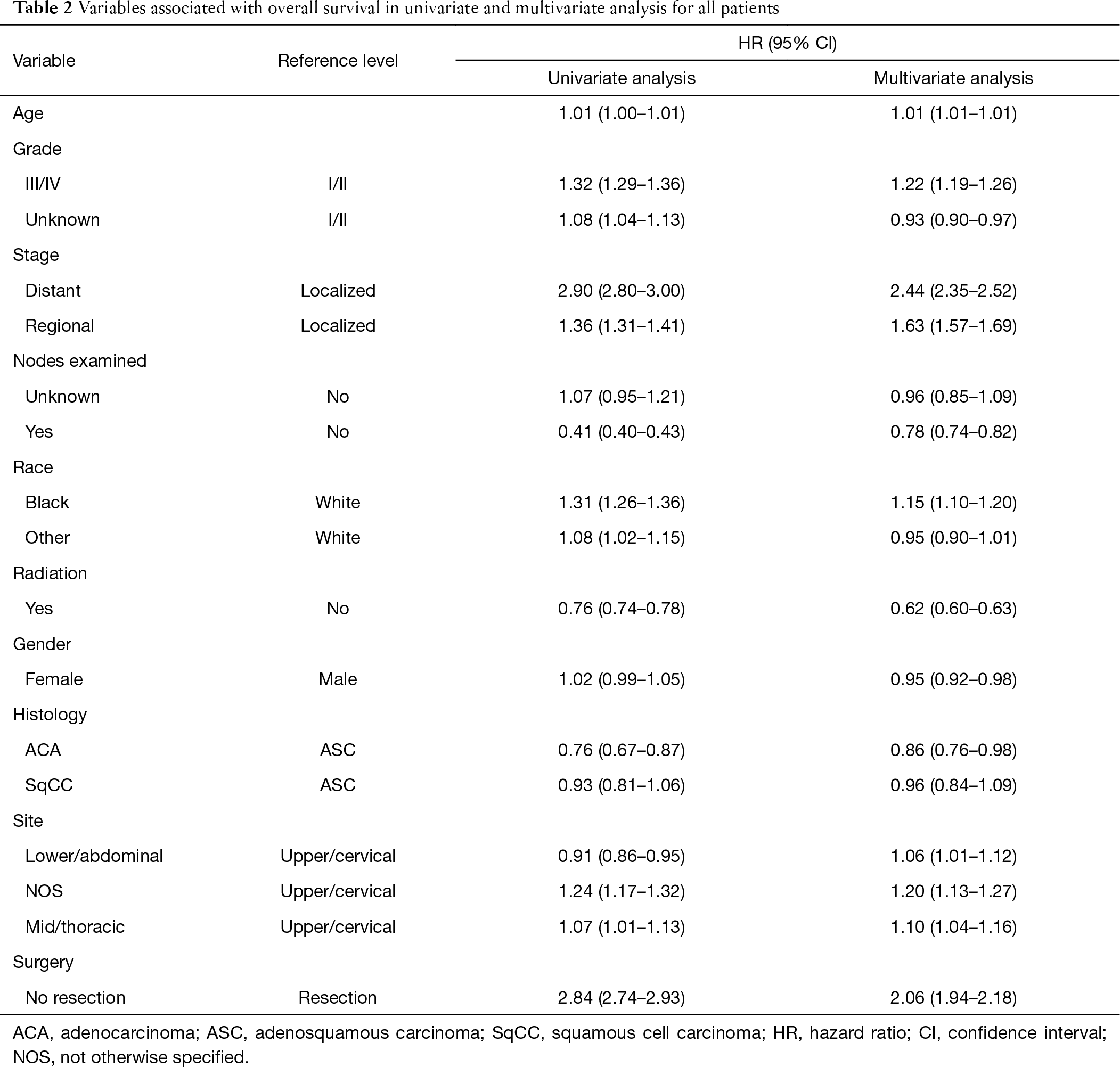 Univariate analyses examining the relationship of different variables with survival of patients with ASC (Table 3) shows that decreasing stage, radiation therapy and surgical resection are all associated with better outcomes in this population. As has been seen with other histological groups of esophageal cancer, examination of lymph nodes during surgery is associated with improved survival, suggesting that this could be a marker of the quality of the oncological resection. Interestingly, when the survival across all three histological subgroups is compared across histological grade (Figure 2), ASC and SqCC demonstrate worse overall survival when compared to ACA only in the grade I/II population. 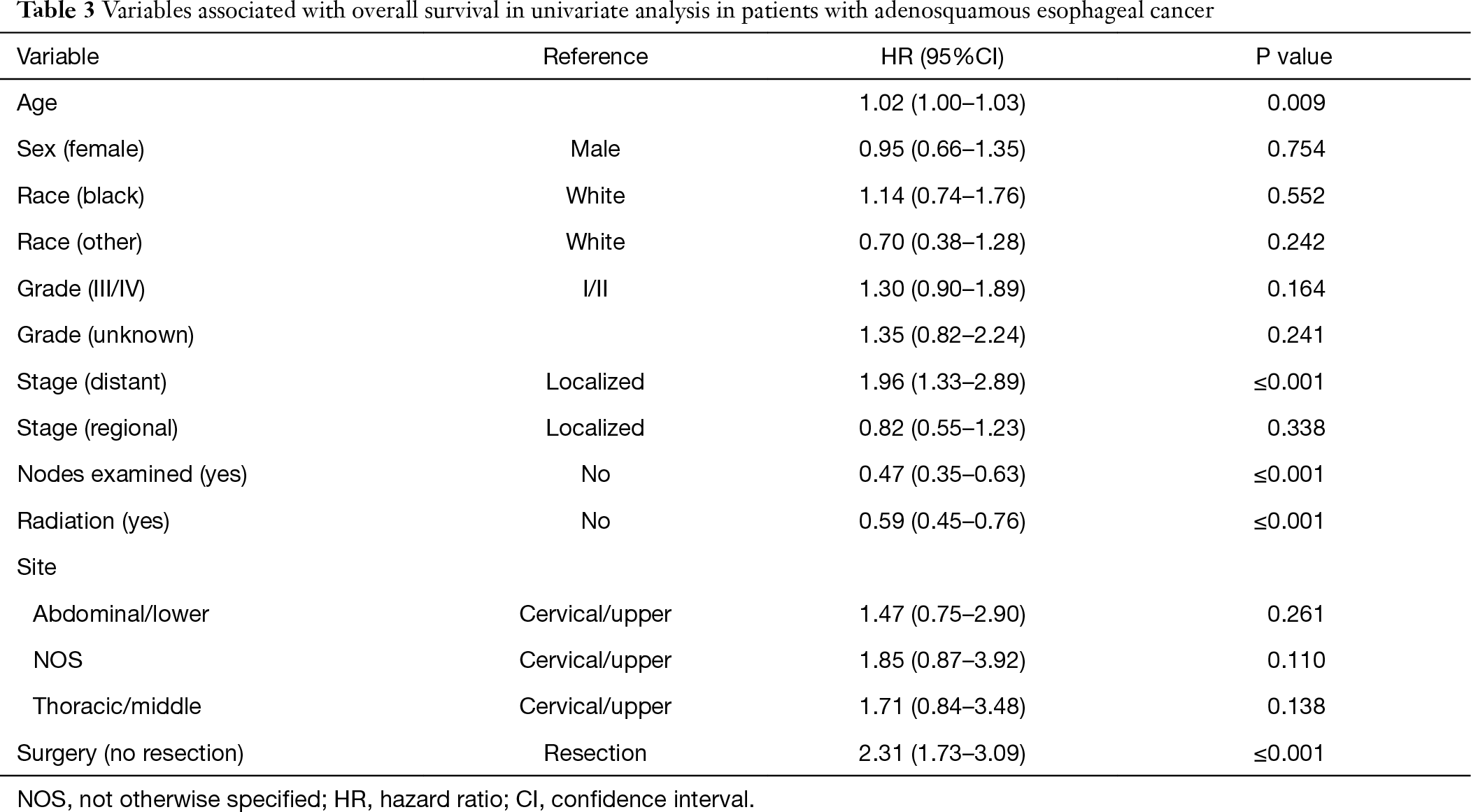 Figure 2 Kaplan Meier overall survival curves for patients with adenosquamous carcinoma of the esophagus compared to other histologies for low (A) and high (B) grade tumors.

Consistent with existing literature, ASC of the esophagus is a rare entity, comprising approximately 1% of the total esophageal cancer population in the United States. According to WHO classification of esophageal cancer (19), ASC of the esophagus is a variant of ACA that “has a significant squamous carcinomatous component that is intermingled with a tubular adenocarcinoma”. Due to this rarity, most reports of this tumor in the United States are limited to case reports. Therefore, a description of clinical characteristics of this tumor has been lacking.

Our current study shows that the demographics and clinical characteristics of ASC are somewhat closer to ACA rather than SqCC of the esophagus. Most are found in the lower third or the abdominal portion of the esophagus and present in advanced stage. They tend to be higher grade tumors with poorer prognosis. This is consistent with most published literature. However, what is different in this analysis is that the outcome of ASC seems equivalent to SqCC. This is different from the findings of Chen et al. (17), who found that ASC had a prognosis worse than that of SqCC. This may be explained that by the fact that Chen et al. did not perform a multivariate analysis of the entire population to adjust for the difference in outcome with ASC to advanced presentation vs. the innate aggressiveness of the tumor. Another possibility is that SqCC of the esophagus tends to have worse overall outcomes in the United States than most series in the East. In contrast to the finding of both of these series, Yachida et al. (14) found that ASC has a better prognosis than SqCC in their series of 18 patients with this disease. This may be at least partly due the fact that ASC tumors in this series were early stage tumors with low T status.

Another interesting discrepancy is the viewpoint of some recent authors who have performed careful pathological examination and surmise that these tumors arise in a bed of squamous cell cancer (17). This may due to the fact that the predominant histopathology in the population in which the ASC variant was found was squamous cell cancer. In contradiction, several reports exist of the occurrence of ASC in a bed of Barrett’s dysplasia (11). Also, animal models of esophageal cancer show an association between duodenal reflux and the occurrence of adenosquamous tumors (20). Perhaps, the final ASC histology may be the result of de-differentiation of tumors of either histological origin.

A major limitation of this study is the reliance of retrospective analysis and lack of expert histological examination of each specimen. Also, an audit of the specific pathology studied is not possible to avoid misclassification bias. In addition, detailed treatment information is not available to dissect out the impact of specific treatment regimens. Given these limitations, specific treatment recommendations cannot be made. The positive association of both radiation and surgery on overall survival suggests that treatment decisions should be based on stage rather than the presence of ASC, and that radical treatment should not be withheld based on the presence of ASC alone.

ASC of the esophagus is a rare histological variant comprising 1% of esophageal ACA in the Unites States. This histological subtype presents in later stages, at a higher grade and portends a poorer survival than the more common ACA. Despite this radiation therapy and surgical resection of appropriate stage patients provide the best chance of survival.

Disclaimer: The content is solely the responsibility of the authors and does not necessarily represent the official views of the National Cancer Institute or the National Institutes of Health.